Bbnaija star, Dorathy has taken to her page to react after seeing what Ex housemate, Lilo shared on her (Lilo’s) page about her. 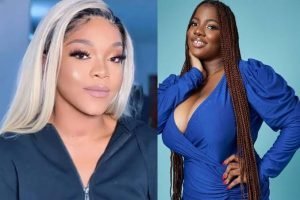 Lilo’s caption got a lot of fans curious as they all rushed to view the photo she uploaded to know if she was saying the truth.

“Someone tell @Thedorathybacht to put some clothes on”

However, it turned out that Lilo’s private chat with Dorathy only contained a sticker which was sent by Dorathy to Lilo. 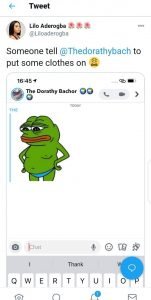 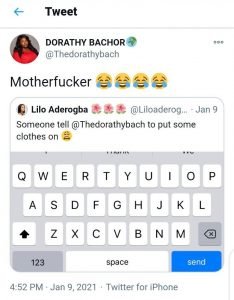 We may have been denied justice, but we will never keep quiet – Nigerians mark three months anniversary of #LekkiMassacre


Today, 20th of January, 2021 is a sad day for many Nigerians as it marks 3 months since peaceful protesters demanding an end to police brutality were shot at, leaving many wounded and over a dozen killed.

The incident has left a sour taste in the mouths of victims, families and Nigerians who watched the horrid incident that took place on a Tuesday night at the Lekki toll gate, Lagos state.

According to videos shared on that night, military men were seen opening fire on the youths protesting under the #EndSARS banner and causing serious casualties. A case of which Nigerian Army authorities have denied on several occasions, stating that soldiers fired only blank bullets in the air.

Today marks exactly 3 months month since the shooting event of October 20, 2020 and Nigerians have taken to social in remembrance of those who lost their lives.


• After tasting Ghanaian Jollof presented to her by supporters, Erica insists Nigerian Jollof is better.

• The 2020 BBNaija star earlier today traveled to Ghana from Dubai for a meet and greet with fans.

You could recall that Erica made it to Ghana earlier today, Wednesday, January 20 after her successful trip to Dubai courtesy of Nigerian-based travel company, Travelbeta.

The reality star utilized the opportunity to meet with her Ghanaian supporters who graced the airport in the early hours of morning to welcome their Star Girl and Queen of Elites.

However, in a video posted via her Instagram story, Erica was spotted with some of her fans who hosted her in a lounge with lots of gifts presented to her.

Also, the Star Girl was served the popular African recipe, Jollof rice which she tasted and confirmed which among Nigerian and Ghanaian Jollof is better and probably tastes sweeter.

After tasting the food, Erica stated that Ghanaian Jollof is good but it can’t be compared to Nigerian Jollof and she told her supporters who were present that there’s no amount of sweetness from Ghanaian Jollof that would supersede one cooked in Nigeria.

BBNaija’s Lucy reacts after being accused of online begging (video)

• Rumours have made the rounds stating that all the gifts Lucy received from people were as a result of her begging for them.

• The Ex-Lockdown star stated that as long as she knows the God she serves, He will always provide for her and not through begging.

Big Brother Naija season 5 Lockdown reality television star and ex-housemate Lucy Edet Essien has taken out time to retort an accusation by people who claim she begs for gifts.

In a video the reality star posted via her Instagram story on Wednesday, January 20, she mentioned that a lot of people have been saying she begged for all the gifts she received since after BBNaija Lockdown show.

And this could be linked to a recent package the BBNaija star received from someone whom her colleague Kiddwaya gave her phone number. She has also received a cash from her female co-reality star Nengi who according to Lucy, gave her money totalling thousands of naira.

However, Lucy believes the secret to her gifts has been because she’s doing the right thing which is GIVING, hence, the bible verse, ‘give and you shall receive.’

The Cross Rivers State-native added that people should understand that whenever you know the God you serve, you don’t have to beg, because He will always provide for you.

She said, “Hi guys, good morning. I just want to say one thing. The rules of giving are very simple. Even the bible tells you say, give and you shall receive.

“I don’t know how you should be expecting that I would come and announce, oh! I gave to this one, I gave to that. Not all of us have that mindset.

“I don’t see why I have to come and explain to anybody or people telling me, oh! me I’m going around begging.

“All I just have to say is that if you know the God you serve, basically, you don’t have to beg, God would always provide.”


The drama after big brother naija lockdown house seems not want to end soon, as exhousemates keep shading one another in any slightly opportunity given to them on social media. 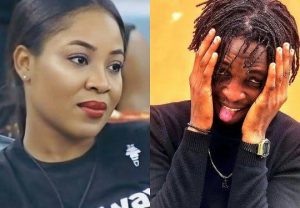 This time, Laycon has stylishly shades Erica through his Jimmyjump off at Jimmyjat studio. The bbnaija winner and musician said shippers should need to rest, that he got a lot to brag of, but he just decided to stay humble.

However, no one need to tell before you know that he was referring to Erica fans and Erica, because Erica fans are always found of shipping Erica with Kidwaya and Laycon.

Recalled that Erica once said that Laycon doesn’t worth her and she also said that, she don’t want people to google her name and see Laycon with her name. That is why the young musician said that, he got a lot to brag about but he is humble.

In Laycon bars through Jymmyjat jumpoff, he said;

“So the shippers need to rest

There is a lot to brag about but I stay humble

And also let the number speak

Am not even at the top but they wanna cry

Remember, the Music made me go into the show

I went on the show

Caught cruise on the show

Made money on the show

Made money off the show

Since I won the show


Bbnaija stars, Ozo and Nengi are 2 people that fans want together, right from the days of the Big Brother Naija show, fans always wanted them to date. 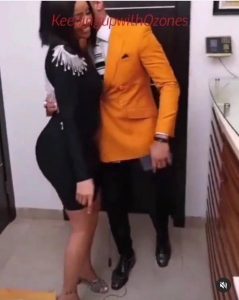 Yesterday a video was released online, and it has sparked reactions from the fans of Ozo and Nengi already.

The video showed the moment Ozo gave Nengi a peck on her cheeks, and also hugged her, while she blushed. 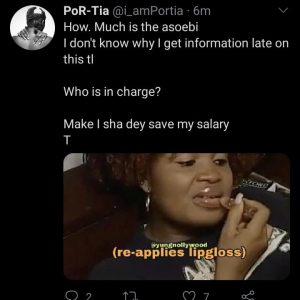 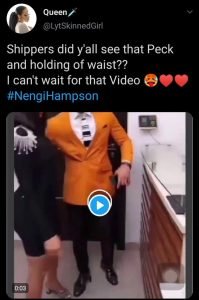 This made their fans really happy about it, as it seems like Nengi an Ozo would be in a new show soon.

“There are some guys who can never cheat on their girlfriend, me and 6 others”- Prince says 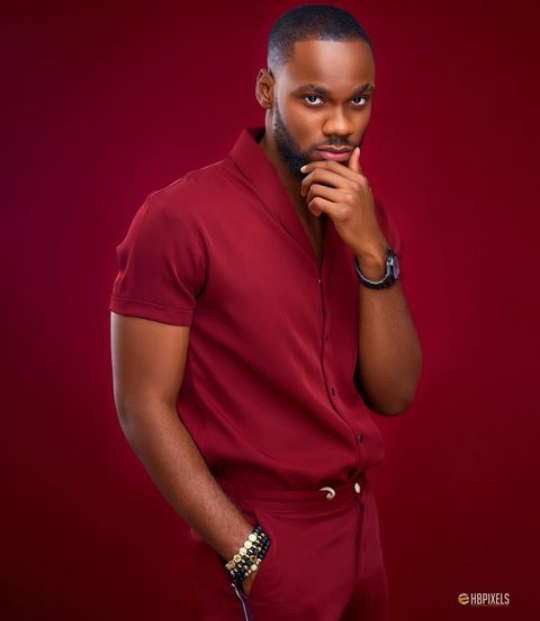 The reality TV star shared a post by a twitter influencer, telling his followers that there are some men in this world that can never cheat on their girlfriends, unfortunately its only him and six others. 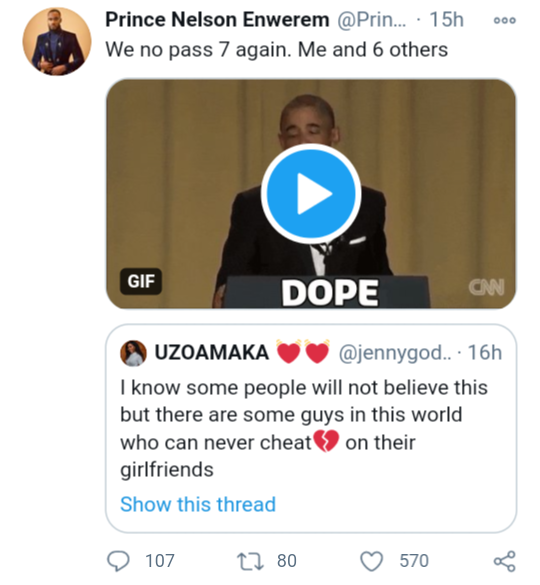 Prince Nelson Enwerem is yet to publicly reveal his girlfriend, however, himself and colleague, Dorathy Bachor are very close.

“See how you use a 3month old car” Fans react as Dorathy shares picture of the state of her car. (Details)


Bbnaija star, Dorathy took to her social media page to share a Short clip of the state of her Benz Car which attracted whole lots of reactions from fans on social media.

Dorathy was given the Benz car by her fans on the 4th of November. So the car is just 2 month old and some weeks.

Seeing the state of the car it shows everything some fans were saying some weeks back is true.

Some fans that reacted to this are of the opinion how can somebody use car like this within that short period of time.

Is not everyone that deserves expensive gifts- A fan wrote

Another set of fans that reacted to this are of the opinion she is so careless and also not using the car well or that the car is not good truly. 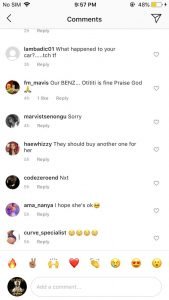 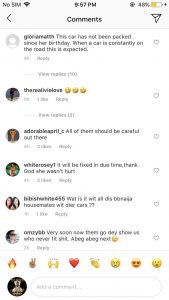